When a sudden emergency occurs, the prefixed plans don’t often work in the hoped-for way. This is the reason why when you have to choose how to operate properly, you should explore all the possibilities applicable in that moment: this is only possible when basic planning knowledge is acquired.
The process of Planning and Scheduling has two different functions that, when implemented together, form the Maintenance Plan.

Maintenance Planning: process that identifies and addresses in advance any situation that may occur. In addition, it identifies and verifies the parts and tools necessary to carry out the intervention and in which way they have to be done. Planning is therefore useful to define “what”, “why” and “how” by specifying which jobs have to be done with which materials, tools and equipment, why a particular action has been chosen and how the work should be completed. Planning activities include:

Maintenance Scheduling: it refers to the timing of the planned work, “when” the work has to be performed and “who” is in charge to do it. Moreover, Scheduling also means:

For these reasons, when these two operations are implemented together they can bring a lot of benefits in different departments of the company.

THE PLANNING AND SCHEDULING: 6+6 KEY PRICIPLES

As mentioned above, the aim of maintenance planning is to define the correct maintenance activities and prepare them to be scheduled. To do this you need a Planner, who is in charge to develop a detailed work plan that the technicians have to follow in order to accomplish all the tasks. However, to adopt the right maintenance planning and programming techniques, you need to follow some basic principles to make your planning successful. 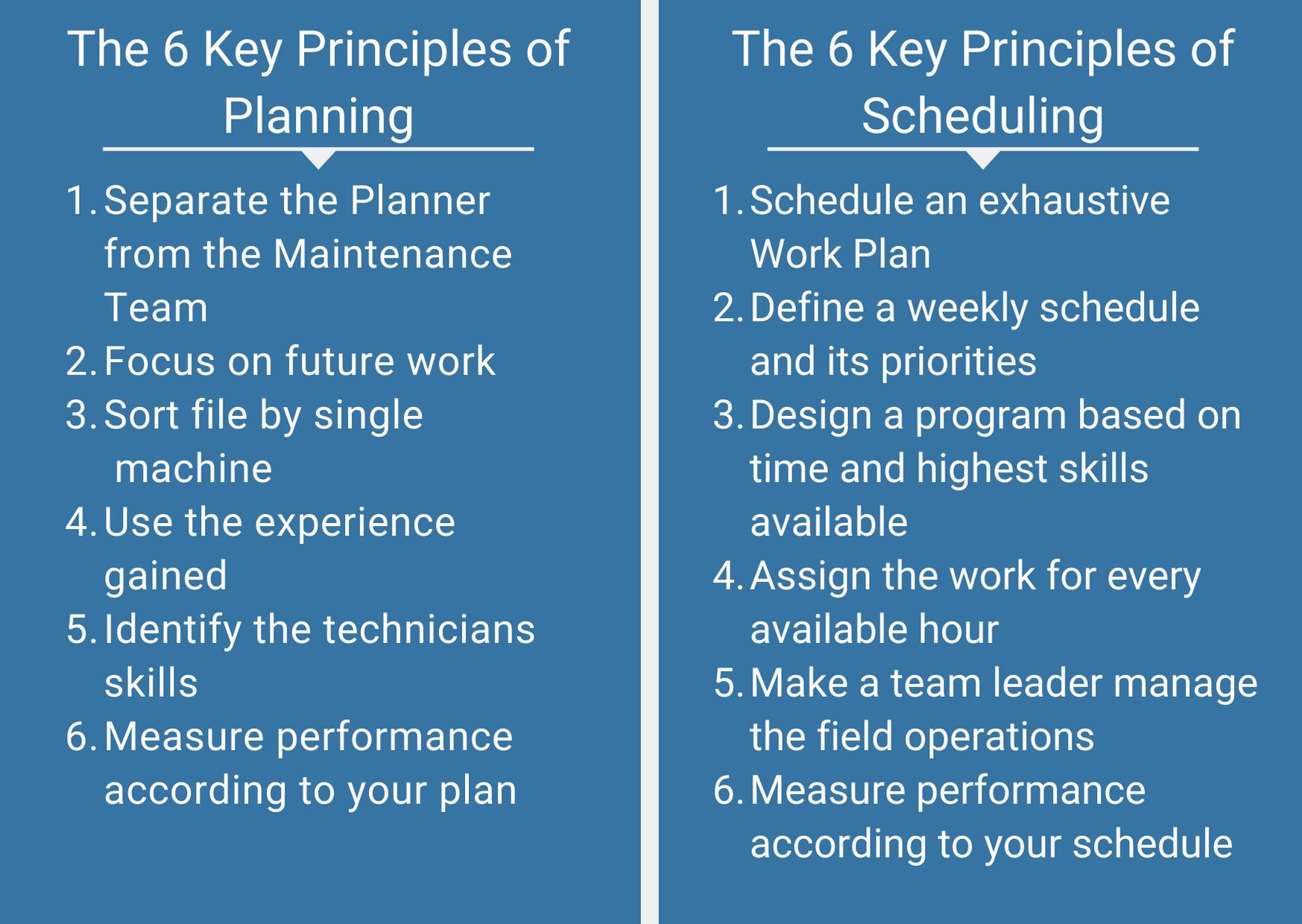 THE 6 KEY PRINCIPLES OF PLANNING

THE 6 KEY PRINCIPLES OF SCHEDULING

Planning helps to complete the job in the best way. On the other hand, Scheduling increases efficiency thanks to the enhancement of tasks organization. It is based on these key principles:

It is not always easy to follow these principles because to ensure a proper functioning of Maintenance Program skills such as communication, cooperation and essential expertise are required for its realization. At the same time, when all these aspects are properly combined and implemented the results you can achieve are: better coordination of maintenance activities, higher efficiency, a real performance optimization, increased plant reliability, control and reduction of maintenance costs.

In MIPU, we have a Planner that organizes and coordinates the activities of the maintenance team, assuring the maximum effectiveness even when our engineers are dislocated all over Italy. Moreover, we help our customers to actually start or improve the maintenance planning and scheduling plan (it is particularly useful to get everyone on board with a business game).

If you would like to discover which are the best practices to develop your Planning and Scheduling Maintenance Plan, Contact us!

THE HISTORY OF RELIABILITY CENTERED MAINTENANCE

“The industrial sector is characterized by an ascending dependence on machines. Cutting downtimes is now a necessity. Accordingly, the basic repair of a failure in a corrective perspective has begun to be accompanied with the idea of facing the failure in a predictive perspective”.

The study of our history often shows transitions where a precise need becomes evident and necessary all of a sudden. The concept of “Maintenance”, as indispensable function in a production context, finds its earliest roots concurrently with World War II and its historical developments.

Before the War, production sites were characterized by simple machines, poor mechanization and low dependence on downtimes. Consequently, maintenance was intended as merely failures repair, with a corrective approach.

During the Second World War, the development and consequences of military policies shocked the described reality by introducing production pressure, higher mechanization, more complex machines and a certain degree of machines dependence. Hence, the notion of “Preventive Maintenance” began to spread. It extended further when the attention of production entities started to focus on other peculiarities, such as new quality, security, environmental and production standards.

“The History of Reliability Centered Maintenace commenced when the US Federal Aviation Administration (FAA) began to take an interest in reliability, and therefore to passenger security.”

Following World War II, air transport became more and more frequent and accessible. The FAA became interested in reliability, because they had to guarantee security for an increasingly number of passengers. A Task Force composed of expert engineers was established with the goal of a complete re-evaluation of the maintenance methods applied until that time.

Years of research, significant investments and the analysis of 12 years of data finally brought to an innovative maintenance paradigm. The new maintenance framework was described in a report commissioned to United Airlines from the US Defense Department and published in 1978 by Stan Nowlan and Howard Heap. This report is known as MSG-3 or RCM. During the following years, a growing number of factories began to apply the new method, which is summed up in the RCM2 book: a description of the RCM method, applicable in any industry.

Reliability Centered Maintenance: a methodological and analytical approach used to plan and optimize maintenance policies at a corporate level.

RCM can be considered as the result of a series of necessities that production sites had to face since the historical period following Second World War.

Among the main needs we remember:

A correct application of the RCM method is therefore capable to respond to the abovementioned needs, introducing a significant level of control in the production processes as well.

RCM considers implications on security and environment before the effects on production, minimizing the associated risks. RCM is thus able to improve the safety attitude by introducing a special attention to security aspects in the decisional process.

According to RCM, each type of maintenance has an intrinsic value, depending on application. Through decisional diagrams and rules, each situation is characterized by the most suitable type of maintenance. The described process not only fits well to the existing assets (already operating) but is also developed for the new ones (before they enter in service) in order to avoid losses during the early life of the assets.

A correct implementation of RCM involves two main results, namely reducing the cost of maintenance activities and ensuring a longer lifetime of the assets. Costs reduction is the consequence of the minimization of routine works, specifically of maintenance interventions done at regular intervals regardless of assets health conditions. Assets that require this maintenance approach are actually a minority, as shown by the studies that gave life to RCM. Instead, a longer  assets lifetime is assured by using on-condition and predictive techniques.

Would you like to know how you can increase the reliability of your assets?

It’s our core business: contact us to know more!